This is not
who we are

America's Struggle Between VENGEANCE and VIRTUE 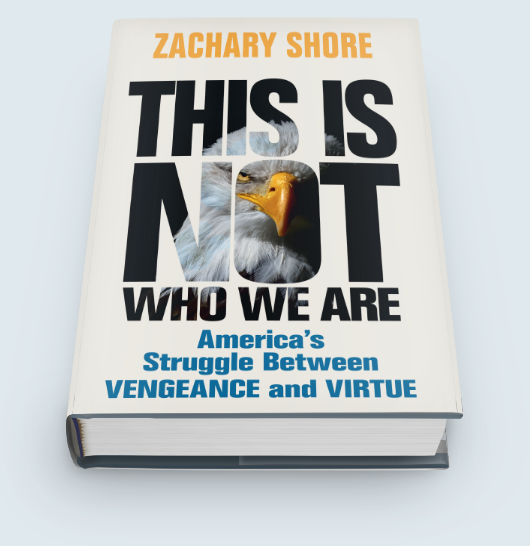 What kind of country is America? Zachary Shore tackles this polarizing question by spotlighting some of the most morally muddled matters of WWII. Should Japanese Americans be moved from the west coast to prevent sabotage? Should the German people be made to starve as punishment for launching the war? Should America drop atomic bombs to break Japan's will to fight?

Surprisingly, despite wartime anger, most Americans and key officials favored mercy over revenge, yet a minority managed to push their punitive policies through. After the war, by feeding the hungry, rebuilding Western Europe and Japan, and airlifting supplies to a blockaded Berlin, America strove to restore the country's humanity, transforming its image in the eyes of the world. A compelling story of the struggle over racism and revenge, This Is Not Who We Are asks crucial questions about the nation's most agonizing divides.

Shore explores America’s struggle to be good at the moment it was becoming great… He reveals how a combination of a vocal minority, distracted leaders, and ambivalent lawmakers can lead to disproportionately punitive policies… This is a potent survey of America’s ongoing battle to live up to its ideals.

On the back cover

“What would we see if we held a mirror to America? Zachary Shore uses key moments in history to find out. He examines the country at its best – and its worst, exploring the roots of both smart and senseless decisions. In the process, he points us toward who we really are.”
— Dayna Barnes, National Defense University

“Zachary Shore is a historian of great humanity and insight, and a gifted writer. He brings all these qualities to this penetrating yet sensitive analysis of the moral dilemmas Americans faced in first perpetrating, and then later confronting, acknowledging and atoning for heinous acts during World War II. Shore’s detailed recounting of the complexities and drivers of wartime decisions and events provides the frame for a deeper examination of our country’s ongoing struggle to live up to its ideals and aspirations.”
— Fiona Hill, former Deputy Assistant to the President and Senior Director for Europe and Russia

“As America emerges from the traumas of recent years, it will be important to restore confidence in our common identity and strengthen our social fabric. Zachary Shore’s This Is Not Who We Are has arrived just in time to foster thoughtful introspection and meaningful discussion of how our past can help us understand the present and build a better future.”
— H.R. McMaster, former US National Security Advisor and author of Battlegrounds and Dereliction of Duty

“In this elegantly narrated tale, Zachary Shore weaves together a rich tapestry of heroes and villains, some of whom often switch roles. That alone would make for fascinating reading, but the surprises that Shore reveals do more than entertain. They spotlight the moral quandaries that plagued Americans as their wartime thirst for vengeance wrestled with their loftier ideals.”
— Adam Hochschild, author of To End All Wars: A Story of Loyalty and Rebellion, 1914-1918

“By examining several difficult decisions made during the Second World War, Zachary Shore’s thoughtful and original book sheds new light not only on wartime policymaking but also on the deep moral conflicts at the core of Americans’ aspirations and experience.”
— James Sheehan, Professor Emeritus of History, Stanford University